Your students will have a blast recognizing how math works in the world of illusion and magic. When subjects like “division” or “fractions” are encountered, what else would a magician do?  He SAWS people in “half”!  Not REALLY but it sure looks that way!  And not just in halves, but sometimes in thirds or quarters too!  To make matters equally mysterious, simple addition and subtraction take a departure in the hands of a magician.  Terry will have your students following along only to realize that the rules of mathematics may seem mysterious at first, but when the “curtain is pulled back”, they will see how easy math really is.

Terry struggled with algebra all through school and as a result he went on a mission to make numbers fun for kids.  “Math-a-Magic” was the result.  This interactive program will have students scratching their heads one minute and thrilled the next knowing that they have discovered the answer on their own, even ahead of Terry.  The mysterious world of numbers and how they relate to our everyday lives is discovered during this fun journey of “Math-a-Magic”.  There are reprintable classroom study guides and teacher’s notes for use in the classroom after the program for reinforcement. 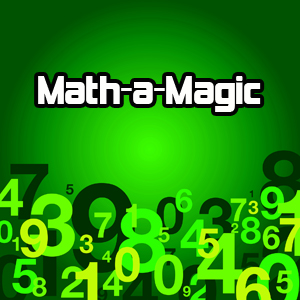